Back in February, UCP of Maine received a check donation of $500 from Bowdoin College Senior Camil Blanchet of the men’s ice hockey team. Camil had been named as one of five finalists for the 2018 Hockey Humanitarian Award. The award is presented annually to college hockey’s finest citizen, a student-athlete who makes significant contributions not only to his or her team but also to the community-at-large through leadership in volunteerism. The donation comes on behalf of the Hockey Humanitarian Award Foundation which awards the five finalists a check of $500 to donate to an organization of their choice. 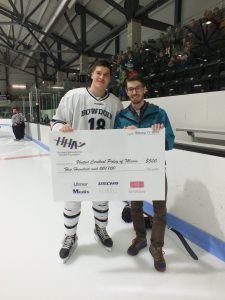 Camil has taken the initiative on numerous service efforts including the recent Bowdoin College men’s ice hockey Cerebral Palsy Fundraiser Game on December 9th. The team has a personal attachment to the fight against cerebral palsy, as the team adopted Lucien Hodell in 2013 through Team Impact, a non-profit organization that connects collegiate teams with children facing adverse or life-threatening conditions. Over the past five seasons, Lucien has been a crucial member of the team as he continues his fight against CP and the team honored his efforts by wearing custom Cerebral Palsy awareness jerseys at the fundraiser game. Fans had the ability to donate to the cause by purchasing their own jersey, which was on sale at the game and throughout the remainder of their season. Camil and the team raised $1,380 with all proceeds going to UCP of Maine as well. Scott Tash, CEO for UCP of Maine recently shared “It’s individuals like Camil that give back to their local community and non-profit organizations that make receiving this donation so much more rewarding. We appreciate Camil and his teammates efforts with this wonderful donation in honor of their adopted team member Lucien Hodell.”